Get ready to add a little rainbow to your life! These tie dye blondies are a literal bite of a rainbow, and they were a real treat for our camping trip last weekend. Rainbow blondies are an easy treat to make without any special tools (no electric mixer needed!) and the fun tie dye look gives me major 90s vibes. Trust me, these rainbow tie dye blondies will have you questioning your love of classic brownies. Don’t worry though, you can love both equally!

What are Rainbow Blondies?

People are always a little confused about what blondies are, but it’s actually quite simple: blondies are vanilla (and sometimes a little white chocolate, like these!) and brownies are chocolate. Blondies can actually be more versatile, in my opinion, because they’re sometimes made with brown sugar or white chocolate to completely change the flavor.

OK, are you sick of me talking about these rainbow blondies yet? That’s fair. If you decide you don’t want to taste the rainbow, that’s OK too! Some people are purists. You can skip the rainbow and bake them as traditional blondies, and they’ll be equally delicious. Plus, you can mix in your favorite add-ins like nuts and sprinkles! Personally, I like them as-is, but sprinkles make everything better. Duh.

Love rainbow desserts?? I have plenty of rainbow food ideas to try in the archives, but these rainbow mousse shooters are my personal favorite. 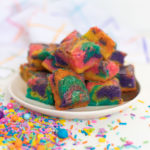